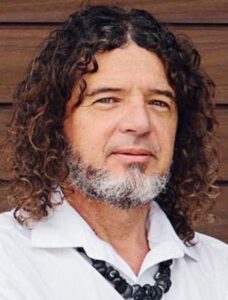 Dave Mangenner Gough is a celebrated artist, curator and cultural practitioner dedicated to interpreting and demonstrating Aboriginal practices for all Australian people to bring communities together and preserve our traditional culture.

As a proud Trawlwoolway man descended from Bungana (chief), Manalargenna’s oldest daughter, Woretemoeteyenner of North East Tasmania, Dave has a strong personal connection to Tasmania and its people. And now, through his artistic practice, he’s committed to giving back to the community.

Dave’s work as a cultural practitioner offers a valuable and positive role in reconciling different groups and breaking down stereotypes. He shares his cultural knowledge and passion with educators and students throughout the state, from primary schools right through to those at the University of Tasmania. He has worked in partnership with Greening Australia staff to deliver programs for schools for six years, with key involvement in Tasmanian Aboriginal Immersion Days in the Midlands.

As an artist Dave has exhibited locally, nationally, and internationally. As a writer, director, producer and performer, his large scale work titled mapali dawn gathering, which was performed in Tasmania, launched the ’10 days on the Island’ art festival in 2021. Dave is now also a published author with the release of his children’s book luwa tara luwa waypa, released July 2022.

Dave applies his active community and arts experience as a board member of local art galleries and Aboriginal advisory councils across Tasmania. He’s the chair of Tiagarra Tasmanian Aboriginal Cultural Centre in Devonport and plays an active role in the protection of Aboriginal heritage sites right around the state.

Through various cultural events, community endeavours and his own practices, Dave offers all Tasmanians a sense of self and pride in a country where culture is respected and considered important enough to fight for.